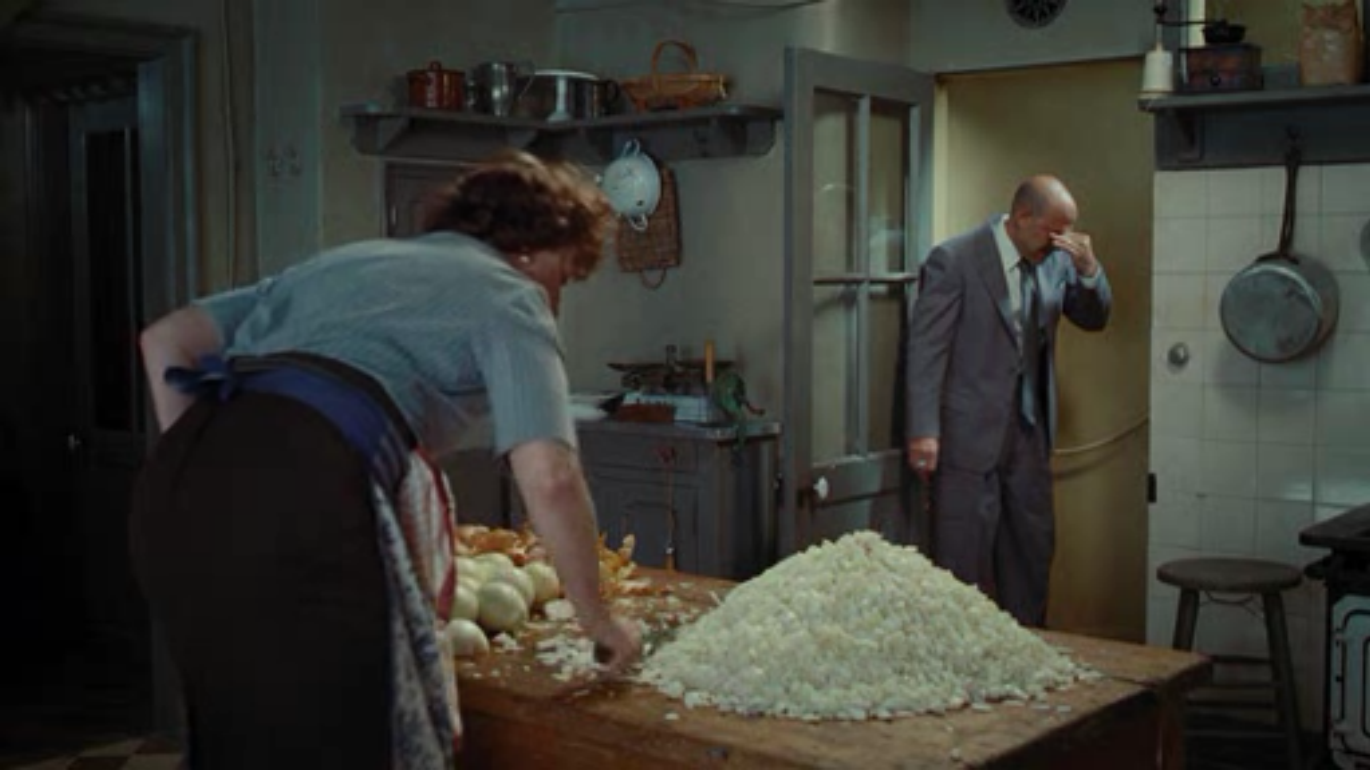 Anyone who has seen the film “Julie & Julia” can recall the scene above.  Meryl Streep as our beloved Julia Child enrolls in classes at Le Cordon Bleu and learns on her first day exactly how important knife skills are if you want to become a chef.

Practice most certainly makes perfect when it comes to knowing how to slice, dice and mince with ease but the key to success is a set of sharp knives.  Yes, I know, it sounds dangerous but a finely honed blade can actually safeguard you from needing stitches.  A dull knife can’t slice a tomato but press hard enough and it could slip and mean an afternoon in the emergency room.

A while back, I collaborated with Calphalon to road test pans from their Calphalon/Williams Sonoma Elite Nonstick line.  I was pretty excited when they contacted me again to test drive one of their new knife sets.  The block has a great feature for the every day kitchen warrior:  SharpIN™ ceramic sharpeners built right into all straight-edge knife slots. Whenever a blade is removed or replaced, it’s primed for use so there’s no need for that separate, how-do-I-use-this-again? sharpener.  Wash and dry them by hand and you’ve got yourself a great set that will last a long time and let you focus on learning.

The 8-inch Chef’s knife (top two) cuts like a dream.  It has a nice weight and feels good in the hand.  I sliced some portabella mushrooms for a dish but this knife went right along with me for the rest of my afternoon of recipe testing, from cutting tofu blocks to breaking down a chicken.  The two gems in this set are the 5-inch Santoku (bottom left) and the 4.5-inch Parer (bottom right).  I fell in love with these two little work horse knives when I used to kitchen assist for a cookbook author.  Besides the chef’s knife, this duo are most useful.  There’s also a set of kitchen shears, which I learned were an invaluable tool in the tiny kitchen drawer I had when I lived in Japan.

Test your knife skills with this dish.  If you have the Calphalon SharpIN™ set, you’ll need the santoku and pairing knives.

Sarah Platanitis grew up a “restaurant kid” and spent most of her childhood pretending to be Julia Child. Her blog sarahinthekitchen.com is a place for kitchen musings and her food writing, photography and illustrations.

This month’s Good Eats is all about Castello Aged Havarti cheese.  Part of Honest Cooking’s latest campaign, The Art of Cheese, you’ll learn about how to make a delicious dish with it.

This comfort food dish is perfectly sized for two hungry people. A “petite” arrabbiata lasagna, this recipe calls for a glass loaf pan and the ingredients that can be made ahead to help out busy schedules.

It starts with a simple tomato basil sauce, seasoned to taste with garlic, onion, and red and black pepper.  The lean chicken sausage has a spicy kick that’s cooled by the creamy, buttery Castello aged Havarti cheese.  You wouldn’t know it but it’s a spot-on substitution for the typical mozzarella/ricotta mix.

I served this dish with a side of steamed broccoli raab.  It adds a touch of bitterness to balance the sweet and the healthy greens make you want to reach for that second helping.  It’s truly delicious!

Prepare broccoli raab by cutting off the dry ends of the stems and pulling off any yellowing leaves. Cut just below the flower heads and stems into 2” pieces. Bring water to a boil in a small saucepot cook until the green pops, about 3-5 minutes. Drain and set aside.

Bring water to a boil in a medium-sized pot. Add sausages and cook for 8-10 minutes. Drain and cool sausages for 5 minutes before carefully using a knife to score the link and peel away the casing. Crumble the meat with a wooden spoon and set aside. In a large skillet, heat 2 tablespoons of olive oil and brown sausage until browned, about 6-8 minutes. Add crushed tomato with basil, mix well and simmer for 10-12 minutes. Set aside.

Preheat oven to 375 degrees. Spray a 1-1/4 glass loaf pan with non-stick cooking spray or olive oil. To create lasagna layers, pour a little sauce and spread evenly. Top with three sheets of oven-ready lasagna then pour one ladle’s worth (1 cup) of sauce and one handful (1 cup) of grated Castello aged Havarti cheese. Repeat for three more layers, or until reaching the top of the glass pan. For the final layer, be sure to cover pasta with remaining sauce and cheese. Cover with foil and bake for 25 minutes. Once baked, remove foil and bake an additional five minutes to brown the cheese. Let rest for 15 minutes before cutting.

Sponsored Post – Honest Cooking and Castello Aged Havarti campaign.  All thoughts and opinions are my own.

This month’s Good Eats is all about wine from the Rioja region of Spain. Part of Honest Cooking’s latest campaign, A Match Made in Heaven, presented by Rioja Wines, you’ll learn about why this wine is so special and how to make two delicious dishes to serve with it.

Rioja is a picturesque region in northern Spain and home to some of the most food-friendly wines in the world. It’s also the next-door neighbor to Castilla and León, the region where I lived for a while in my early 20s.

My two favorite things to do with friends were travel the countryside and eat. I still dream about the foods that we found and it has become a habit to pick-up a Rioja wine for everyday pours and special occasions because it pairs well with a wide array of culinary styles outside the Iberian peninsula.

Rioja wines are made with tempranillo grapes, a black grape that ripens early and known as the king of grapes.  They give notes of plum, tobacco, leather and vanilla.  The alcohol and acidity are deftly balanced and I’ve even seen sorbet made with sweeter Garnacha grape blends.

Riojas can be found in traditional ruby red, as a white (blanco) and a rose (rosado). Winemakers don’t rush their wines to market but rather release them from their cellars ready to drink. This means a perfect wine every time. Most bottles are priced around $15 and a fine vintage runs $30 or less.

In the dusty city of Salamanca, a place with ancient architecture that I once called home, tapas are called “pinchos” because of the toothpicks that pierce the savory snacks. The place we used to visit often would first serve us tiny bowls of piping hot potato stew, the abuelita’s healthier riff on patatas bravas, or fried potatoes, then we’d order up a big plate of lamb “lollipops” with whole fried garlic cloves and a Rioja red.  Trust me, there’s no better way to spend an evening.

Instructions: Rinse and clean lamb. Pat dry. Season heartily with salt and pepper. Heat olive oil and fry cloves of garlic until golden. Transfer to a container and keep hot. Fry cutlets on both sides in oil, about 2 minutes a side.  Serve hot with garlic cloves.

Stay connected to your favorite wine region by joining the Rioja Wine mailing list. It’s fast and simple! Just click on the banner above and fill out the form. You’ll automatically be entered for a chance to win a festive wine dinner. Good luck! #riojabuzz

Sponsored Post – Honest Cooking and Rioja wines campaign.  All thoughts and opinions are my own.

It’d be no surprise to say we ate our way through Seattle and its suburbs.  Below are some of the nosh and noms we found that made our tumblies a lot less rumbly.

What’s What:  (left to right)
Healthy veggie and baked tofu snack with pineapple tamarind to share at Kigo Kitchen.  Catching up on work emails with a cafe au lait at the philanthropic Street Bean Espresso.  Spam onigiri (before being devoured) at the 39th Seattle Cherry Blossom & Japanese Cultural Festival.  Perhaps the cutest beer can I’ve ever seen?  Gluten-free pizza and Caesar salad at The Pike Brewing Company.

A hearty plate of rice, beans and carne asada tacos at Blue Water Taco Grill our first rainy night there.  Remember the lime crisis?  Here’s a sign if you don’t.  Powering up smart phones and a break for DIY frozen yogurt treats at Menchie’s Frozen Yogurt.  Pickle parade at Moshi Moshi Sushi’s Happy Hour.  Rosy taking a photo of her red velvet cheesecake pop from The Confectional.

Know where you are in Seattle but not sure what to eat?  Check out this nifty neighborhood list:

A Thursday with sideways rain meant only one thing: a trek to photograph Pike Place Market.

What’s What:  (left to right)
The often under-photographed second sign of Pike Place Market.  Buskers.  Tulips and the length of the middle market with fabulous neon overhead signs.  Wondering if that fish is really dead?  Taking a picture of some guy taking a picture of the original Starbucks sign.  Pike Place Fish Company, yet too shy to catch a fish with them.  The cranky lady from the Oriental Mart in the heart of the Market that Andrew Zimmern met one day to have salmon collar soup.

I have been working on the Women & Food Project as many of you, my dear readers, know.  The website is looking pretty stellar, just in time to welcome three new participants (left to right):

Last month’s Spicy Peanut ice cream was such a big hit that I decided to come up with yet another interesting flavor:  Chocolate Hibiscus.

My recipe uses Wild Hibiscus Flower Company’s Heart-Tee and their Flowers in Syrup.  I made a candied ginger-almond topping to make it even more yummy.  I recommend eating it with good friends from the cutest bowls you can find.  I found my darling one at Kobo Shop & Gallery in Seattle.

I’ve been obsessed with Brussels sprouts lately! This week at Costco I discovered black rice and a giant wedge of Jarlsberg, my favorite cheese. Wondering what I could make with the pair, I decided to incorporate my vegetable crush to make a gluten-free and vegetarian-friendly Brussels sprout quiche with black rice crust.

A word or two about black rice:  It’s just as healthy as brown rice but packs a serious anthocyanin antioxidant punch.  Some folks call it “purple rice” and it was known as “forbidden rice” in ancient China since only royals could eat it. Black rice can be tricky to cook but you can still use a rice cooker if you don’t mind a little purple mess.  Be prepared for the inevitable skeptical look when the amazing cook that you are presents a dish that looks a little “over done”.  Rest assured, black rice takes heat well, doesn’t burn and has a nice nutty crunch.  You can also sub it in place of brown or white rice and is perfect for dessert recipes, like rice pudding, because it is naturally sweet and starchy.

The quiche recipe below is very easy to make, especially if you have a food processor with blades that can slice and shred. Give it a try on a busy weeknight!

We began our first full day in Seattle with a hearty breakfast at Tom Douglas’ Lola.  Our first stop was Dahlia Bakery across the street to buy some of that blueberry jam that completely rocked our world.  They typically don’t sell this but, if you ask nicely, they just might!

What’s What:  (left to right)
Lola’s fun menu, a view from our booth and my asparagus scramble with feta and dill and those killer smashed garlic fried potatoes.  Douglas’ Dahlia Bakery cookbook is proudly on display in the teeny space, that yummy blueberry jam, a peek at lemon cake tarts and flourless hazelnut choco pies and our very favorite shop boy.